- Company offers fans the opportunity to win cool prizes, including $670, the average amount customers save with Mercury, and be entered to win a Luxury Suite at Home.
- Sponsorship brings in-stadium 'My First Car' feature to the comforts and safety of home.

LOS ANGELES, Feb. 10, 2021 /PRNewswire/ -- Going to a live hockey game is the "holy grail" of being a die-hard fan – the excitement of seeing your favorite players in person, coupled with the shared experience of cheering them on alongside other jersey-wearing fans, creates an energy that's pure joy for fans. 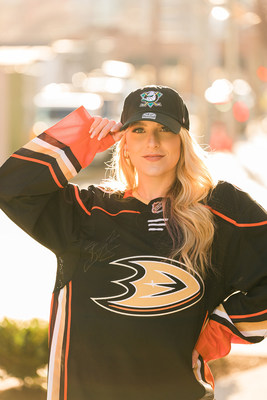 While it's true the 2021 National Hockey League season looks a little different this year, Mercury Insurance (NYSE: MCY) wants to help Anaheim Ducks fans bring the thrill of being at Honda Center to their homes – fans who show off their superfan swag from home will get the chance to win a variety of prizes sure to surprise and delight.

"There's nothing like being at Honda Center to watch a Ducks game live – while the action on the ice is blood pumping, it's being with other Ducks fans – wearing your jersey and screaming for a Getzlaf goal – that truly brings the game to life," said Erik Thompson, Mercury's vice president of advertising and public relations. "That's something we've certainly loved being a part of over the past seven years we've sponsored the Ducks.

"While nothing beats watching the Ducks win in person, we wanted to bring fans a way to come together to celebrate the team they love without going to the game."

Anaheim Ducks Superfans
The Anaheim Ducks Superfan contest runs until March 15, 2021. Ducks fans can enter now by uploading photos and videos at MercuryInsurance.com/Ducks or tagging social posts on Instagram or Twitter with #MercuryDucksSuperfan for a chance to win. Winners will be chosen each week for prizes, including Ducks merchandise, a Zoom call with a Ducks player or $670, the average amount customers save when they switch their auto insurance to Mercury.

All entrants are then entered to compete for the grand prize – a Luxury Box at Home, including:

My First Car
Mercury Insurance, the Anaheim Ducks and Fox Sports Prime Ticket have partnered to bring hockey fans an in-home Jumbo Tron experience with "My First Car," an inside look at their favorite players' fond memories and firsts behind the wheel.

"This more intimate hockey experience is something typically reserved for in-arena fans – it's not often you get to see Jumbo Tron-style candid player footage from home," said Thompson. "The 'My First Car' series is our way of letting Ducks fans know that we, too, miss going to Honda Center, so we've created a video series that allows players to tell some stories about their first cars.

"We all have vivid memories about our first cars, so we thought it would be fun to ask Ducks players about their experiences with their first vehicles; big speakers turned out to be a common theme!"

The My First Car series will play throughout the season. Visit the Ducks online at www.nhl.com/ducks to watch the Ducks My First Car sizzle reel video and the series, or visit the Anaheim Ducks and Mercury Insurance YouTube channels and social media pages or catch the videos on Ducks Live on Fox Sports Prime Ticket.