Ensuring the safety and well-being of their children is every parent's first priority. While we can't be with our kids all the time, parents of teens going through the Drive Safe Challenge can rest a bit easier knowing their young drivers have the tools to help avoid potentially dangerous situations while driving.

ANAHEIM, Calif., March 23, 2019 /PRNewswire/ -- Distracted Driving Awareness Month starts next week and, today, the Anaheim Ducks, the California Highway Patrol (CHP) and Mercury Insurance got a head start at Honda Center with the "Mercury Insurance Drive Safe Challenge," a one-day driving school immersion course designed to equip young drivers with the knowledge and skills to be safe on the road. Developed by Mercury Insurance to help reduce car collisions, the program aims to make roads safer for everyone. 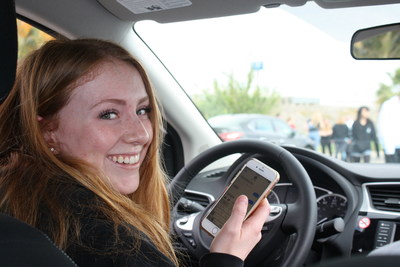 Teens from Southern California high schools and the Anaheim Ducks High School Hockey League took part in the event, where they learned evasive maneuvering for collision avoidance and car control for slippery surfaces – an uncommon occurrence in Southern California – from professional driving instructors.

A blind spot awareness demonstration provided by KKW Trucking was a new addition to this year's event. It showed participants how to better share the road with large vehicles like tractor trailers – fatal accidents involving passenger vehicles and large trucks saw the highest increase (9%) from 2016 to 2017 for all categories tracked by the National Highway Traffic Safety Administration (NHTSA).

"Ensuring the safety and well-being of their children is every parent's first priority," said Mercury Insurance Vice President of Advertising and Public Relations Erik Thompson. "While we can't be with our kids all the time, parents of teens going through the Drive Safe Challenge can rest a bit easier knowing their young drivers have the tools to help avoid potentially dangerous situations while driving."

According to NHTSA, nearly six teen drivers died in a car crash each day in 2016 – the leading cause of death for 15- to 19-year olds nationwide. Among the causes of teenage driving fatalities are speeding, not wearing a seat belt, driving under the influence, distracted driving and engaging in risky behavior with other teens in the car.

"I definitely don't want to be distracted while driving and I will do everything I can to prevent that," said teen Andrew Barone after driving on a slalom course while being prompted to send a text.

According to CHP Officer Paul Fox, inexperience is a major reason why teenagers are involved in more collisions than those who have more years behind the wheel.

"Getting a driver's license is a major milestone for young drivers, but it is also a big responsibility, which is why we encourage parents to set a good example for their children by displaying safe driving behavior behind the wheel. After all, safe driving is about more than just knowing the mechanics of operating a vehicle," said Officer Fox.

Parents who attended the program were also tested. Outfitted with goggles to simulate impaired vision, parents were instructed to drive a vehicle through the course accompanied by a CHP officer.

"I think Mercury's done an outstanding job offering this course to so many teen drivers and to the parents, for that matter, showing us skid patterns and antilock braking," said Harold Jagger, who brought his 15-year-old daughter to participate in the day's activities. "The DUI course for the parents – I think that's fantastic. It really gives you an eye opener to what can happen and what does happen. And teens won't have practical experience unless they do some courses like this."

The Mercury Insurance Drive Safe Challenge, initially launched in 2016, is a free defensive driving program that includes hands-on driving skills training and an interactive classroom session. This is the third time the Anaheim Ducks, CHP and Mercury have brought the program to Anaheim teens and parents.

"The Anaheim Ducks are committed to making our community a better place, and partnering in the Mercury Insurance Drive Safe Challenge helps more than just our teenage participants," said Anaheim Ducks Vice President and CMO Aaron Teats. "The teen drivers here today gained knowledge and skills about being safe on the road which will benefit them, their passengers and other drivers on our roadways. We're proud to participate in such an important event."

Mercury Insurance has created a wealth of free information and tools that parents and teens can use to help prepare for life behind the wheel and shape responsible driving behavior. Visit http://drivesafe.mercuryinsurance.com to access tips, videos, quizzes and much more.

About the Anaheim Ducks
The Anaheim Ducks are commemorating their 25th Anniversary Season presented by UCI Health in 2018-19. The club was born in 1992 and played its first-ever game on Oct. 8, 1993 at Honda Center (then Arrowhead Pond of Anaheim). One of 31 NHL franchises located throughout the United States and Canada, the Ducks have played to over 90% capacity crowds in their history at the 17,174-seat Honda Center. On June 20, 2005, the Ducks franchise was purchased by Orange County residents Henry and Susan Samueli. By securing the first Stanley Cup championship in franchise history in 2007, the club also became the first team from California to win hockey's ultimate prize. The Ducks have reached the Conference Finals five times (2003, 2006, 2007, 2015 & 2017) and the Stanley Cup Final twice (2003 & 2007). The club has won six Pacific Divisions titles in franchise history, including five straight from 2013-17. Anaheim has qualified for the playoffs 11 times in the last 13 campaigns.