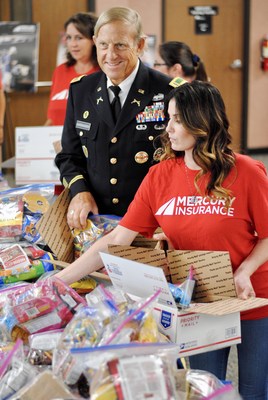 "Mercury is very supportive of the men and women who serve this great country," said Mercury CEO and President, Gabe Tirador. "We employ a lot of veterans, and many employees have family who are serving, which is why I'm extremely proud of this grassroots event that has grown throughout the company. It gives all a chance to say thank you to the members of our Nation's Armed Services."

Packages contain toiletries, snacks, playing cards, games, magazines, comfort food, and a message from Mercury founder George Joseph, a World War II veteran. "It takes a special person to volunteer to protect the lives of others and our nation's freedom, so, first and foremost, I thank you for your service," wrote Joseph.

"It really feels good when you receive one of these care packages," said Trent Carny, active-duty U.S. Navy, Naval Mobile Construction Battalion 3 at the Camarillo packing party event. "The food abroad is different and to get a little piece of home can change your outlook and make your day better. I always liked getting candies and crackers in the care packages, and I saw a lot on the tables here today, so I'm gladly filling up these boxes with everyone here, because I know how it feels to receive one."

The Mercury Insurance packing party is an employee-driven initiative that began nine years ago under the direction of Melyssa Jones and Monica Nungaray. Nungaray's eldest son served with the Marine Corps and was deployed to Afghanistan and Iraq. "My son mentioned that some soldiers don't receive mail or packages when deployed overseas," said Nungaray. "These packages are our way of letting them know that we do think of them and appreciate their service. It's a little touch of home to brighten their day."

… Tom Sandbakken, U.S. Army veteran said, "As a soldier myself who experienced these packages, and also saw others getting them, I know it means a great deal to them…. Whenever somebody got one, it was just like Christmas…even if it was in August."

… Mercury Senior Underwriter and Packing Party co-founder Melyssa Jones said, "I never imagined this event would grow so large from 12 boxes nine years ago at the first packing party to nearly 1,500 care packages today. It warms my heart that other Mercury employees volunteer their time to make someone else's day, just as servicemen and women give their time to protect our nation."

… Trent Carny, active-duty U.S. Navy, Naval Mobile Construction Battalion 3 at the Camarillo packing party event added that the care packages have a lot of meaning to soldiers when they come home, too. "I have one item with me still today: a Bible that was put in a care package for me by a young girl with muscular dystrophy."

… "We really appreciate getting the hygiene products that are included in them," said David Banaszak, active-duty U.S. Navy, Naval Mobile Construction Battalion 3. "In other locations I've been deployed, cards and games that came in care packages kept us entertained for months."

… Mercury Digital Media Specialist Tommy May said, "We more than doubled our goal of 250 boxes in the Rancho Cucamonga office and had to take a few extra trips to the post office for boxes!"

… Mercury founder George Joseph, 95, is a World War II veteran who navigated 50 missions over North Africa and Italy. Mr. Joseph has long been a supporter of our Nation's servicemen and women, and much of his success can be directly attributed to his military service, as he learned a great deal about leadership, dedication to service and sacrifice while in the U.S. Army Air Corps. He went to college on the G.I. Bill, earning two degrees at Harvard as a result.

… Mercury Insurance employees and agents have assembled and sent more than 4,500 care packages to servicemen and women serving overseas.